The House of Salvation

The House of Salvation documents a wonderful basic orientation of man and is a wonderful matrix in working with people. There are 2 basic factors that determine which of the pillars are more important to man than others, although, as always, everything should be laid out and lived in man.

The 1st factor is the personal sign of the zodiac.

The 2nd factor is the human blood group.

These 4 pillars on the basis of human karma give people hope and lead to the ether of consciousness.

I. The Pillar of devotion

IV. The pillar of space

II. the pillar of time

III. The Pillar of Distinctness

The data of the known zodiac has not been correct since the beginning of the Aquarian Age in 1847. The previously equal intervals have receded and since then each sign of the zodiac has its own space:

The sensory organs of the physical organs

There is a wonderful allocation of the different body organs to their “sense organs” in the outside, which in turn speak a distinct language when problems or illnesses occur in these places.

The most important phase in the life of a human being is the time up to the age of 14 / 15, because in this time the circuits are created. The circuits are the base of the human life; one can compare them with the hard disk of the computer. Many different impressions and experiences of the grown-up in this time lead to a stable and colorful network, on which man can build in his life. If the circuits are not closed during this time, the human being will eventually show signs such as learning blockades or symptoms of illness.

The 4 circuits of the human being:

1. The survival circuit is toggled between the 3rd and 4th months of life. In this period the topics, security and/or insecurity, fear, lack of love and loneliness are felt, experienced and accordingly applied as patterns. As an example we could use the hungry, crying baby. If it takes too long for the mom to get ready to start breast-feeding or feeding the hungry baby, the child might form the habit: “I almost starved to death and at the next meal, I will eat more than I need to build up a ” stash ” for long wait. So people can grow up and develop a collecting passion later in life.

2. The ranking circuit is triggered between the 5th month and the 3rd year of life. In this period the child seeks its place in the family. The child can be assisted here by having a fixed place at the table for example. The child also develops a deep creativity during this time, as well as defiance and aggression. Defiance and aggression are two important themes that give the child the feeling that he can express himself and change something with his power. It would be a good thing if the parents would allow this phase of defiance, because it helps people to overcome obstacles later.

3. The speech and device circuit is toggled between the 3rd and 4th year of life. Here the brain and larynx structures are brought into alignment. During this time, the ability to consciously love develops, where the child needs a lot of affection and a rejection of his feelings can lead to deeper disturbances. There is also a strong urge to experiment. The brain metabolism has reached its peak and is now 50% higher than that of the twenty-year-old.

4. The sociosexual moral circuit is switched between the 4./5. year of life and the 14./15. year of life. During this transition phase from child to juvenile, the social behavior, as well as the consciousness of shame and guilt, is shaped. Likewise, the sex behavior and each form of moral conception are created.

This concludes the basic imprint of the human being and everything else in the life of a human being is the constant repetition of the same ” record ” only under different circumstances. That means, each injury in time, comes later again to the human being, so that he can recognize it and can separate himself from this topic.
Based on the blockages, symptoms or identity crisis in a person’s life, it is possible to detect which circuit has not been completed. In therapy it is possible to start at this stage and consciously close the circuit.

The teaching of the spirit meridians is the truth that shines behind the ancient meridian teaching of Traditional Chinese Medicine.

The spirit meridians are the carrier substance of the heavenly cosmology, as well as the wisdom consciousness of the Sophia, which penetrate the human being via the 5 ethereal centers and bring about transformation. This is a wonderful base for the 5-fold man to free his mind. 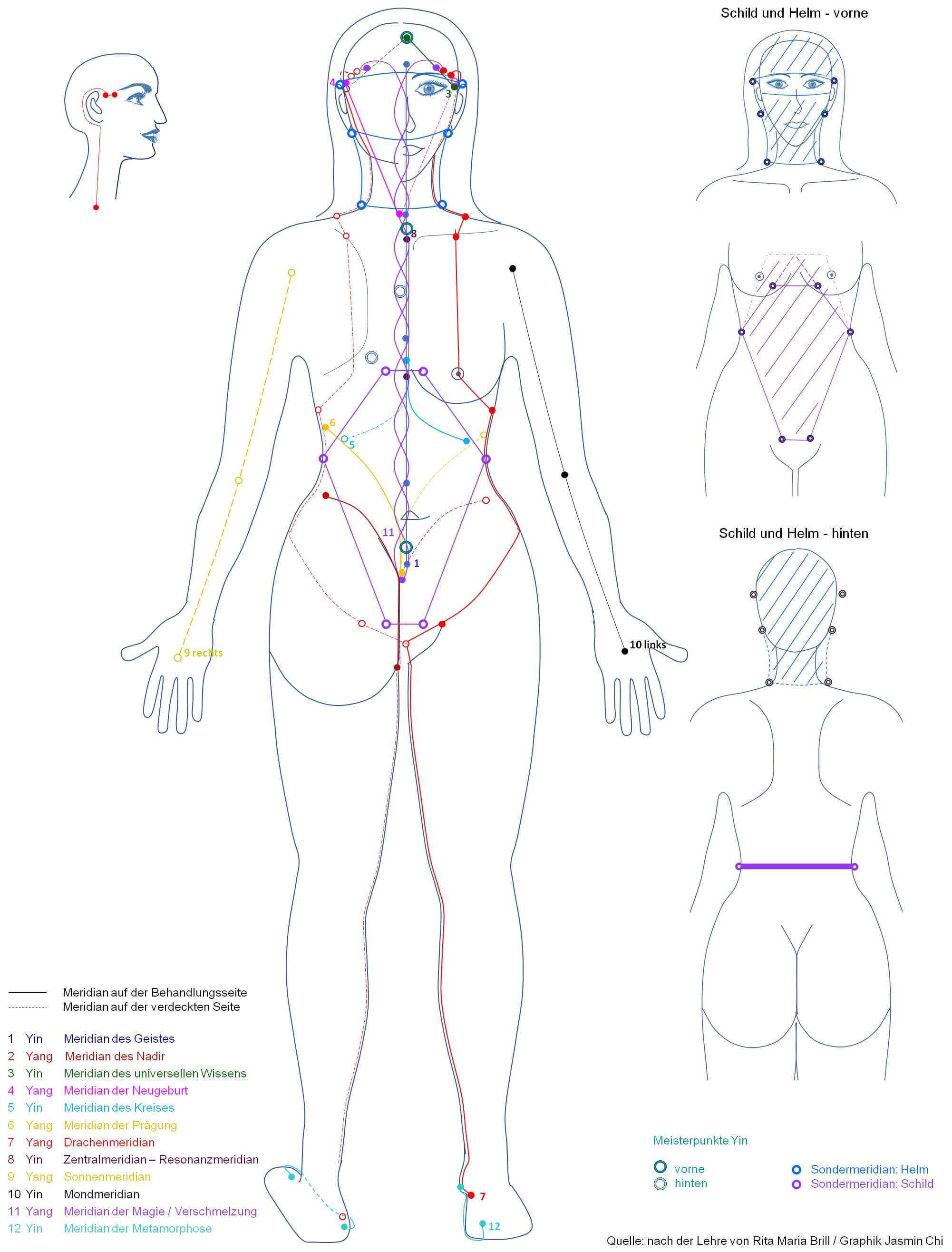 From the viewpoint of Karma Shiatsu, every part of the body is assigned to a fear that works in the background. This constellation provides a deeper insight into the true causes of physical pain or abnormalities of the physical body.

The Karma Zones of Humans

The 8 bodies of the spirit - humans

The Holy Trinity of Mankind

The Holy Trinity is the foundation of the healthy order of the human being. 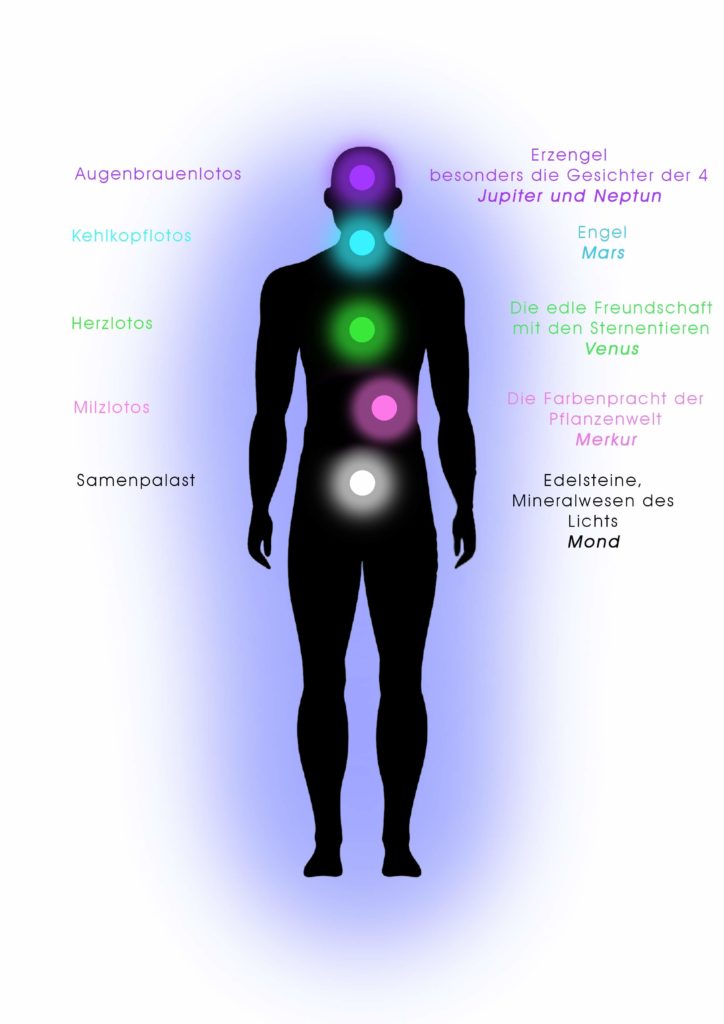 The 7 chakras of humankind 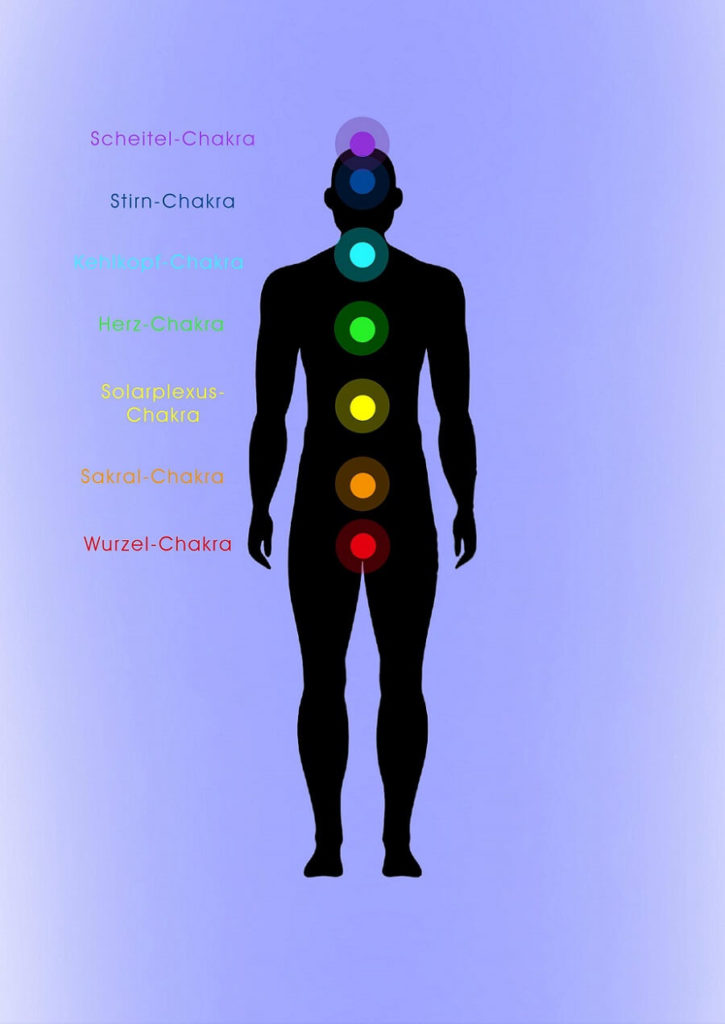 Diagram of the spine 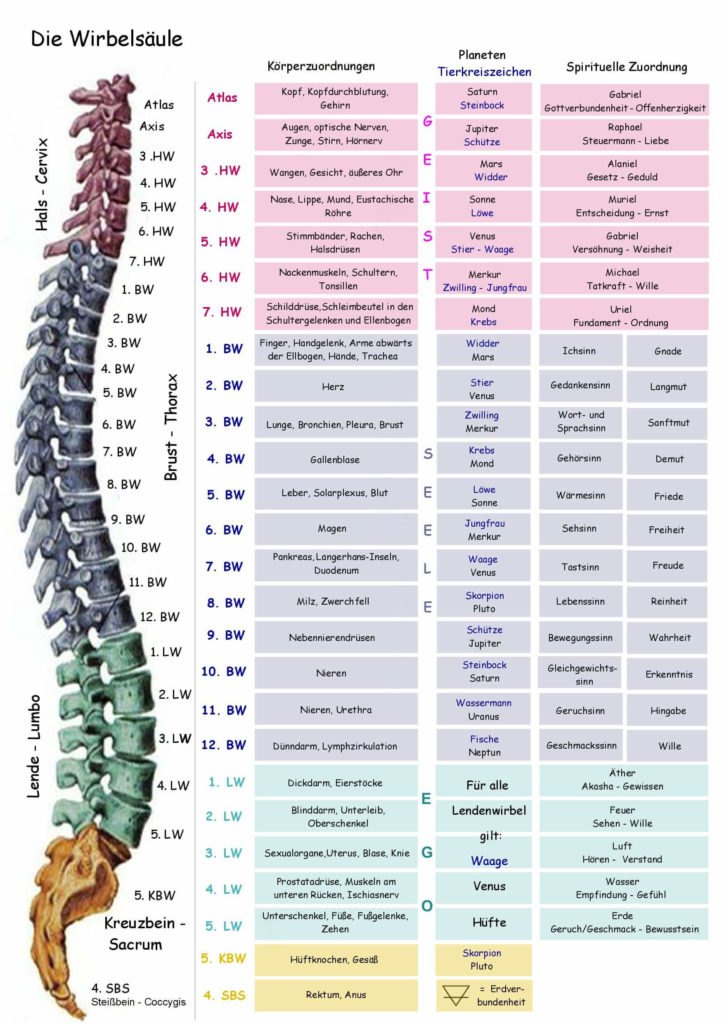 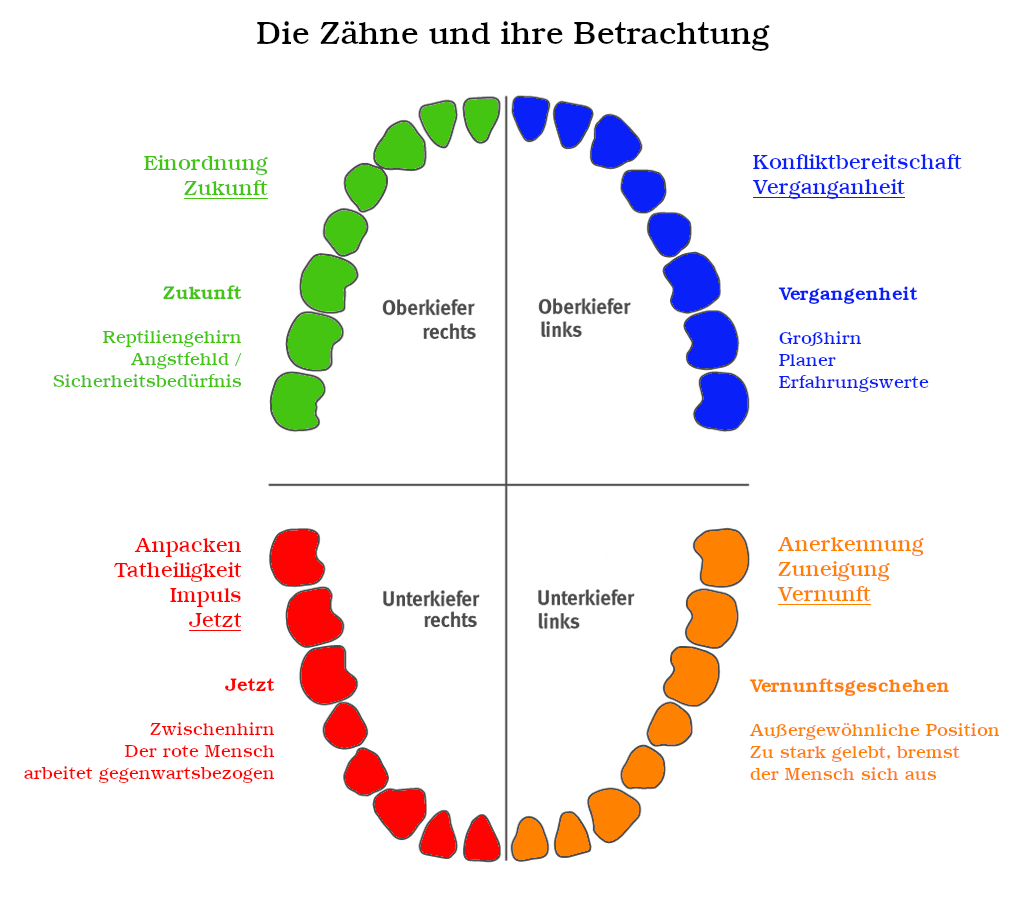